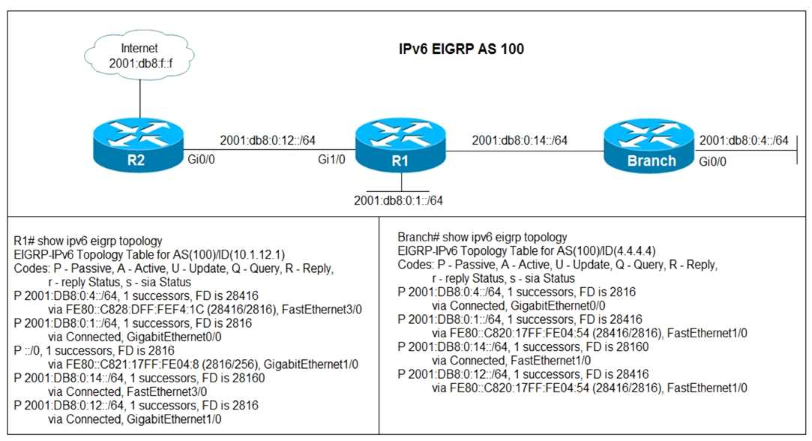 Users in the branch network of 2001:db8:0:4::/64 report that they cannot access the Internet.
Which command is issued in IPv6 router EIGRP 100 configuration mode to solve this issue? 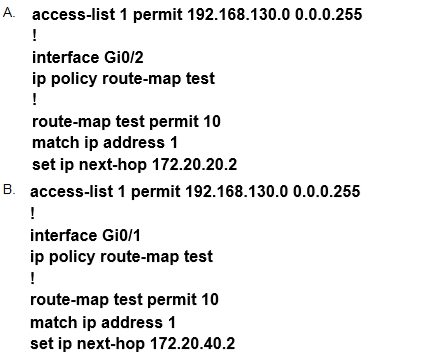 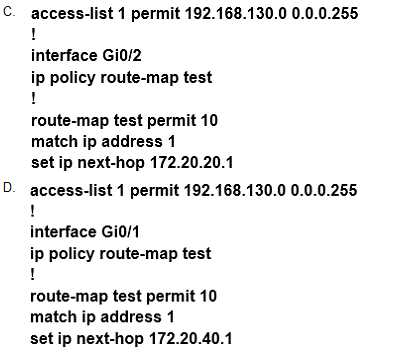 What is the result when the route-map OUT command is applied toward an eBGP neighbor R1 (1.1.1.1) by using the neighbor 1.1.1.1 route-map OUT out command? The output of the trace route from R5 shows a loop in the network. Which configuration prevents this loop?
A) 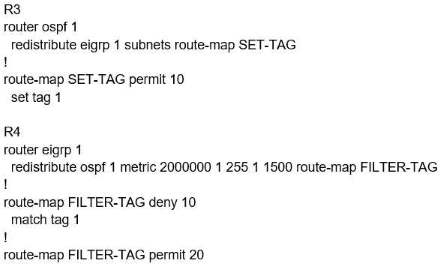 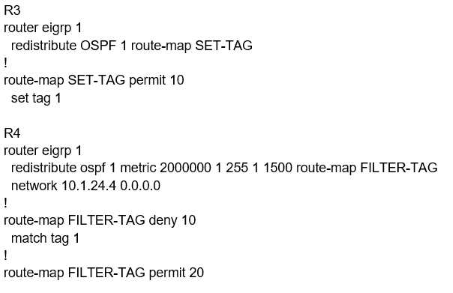 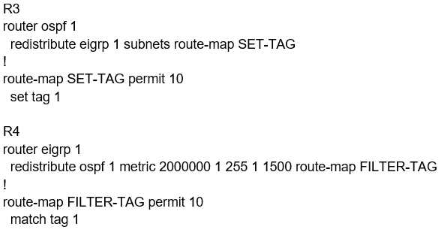 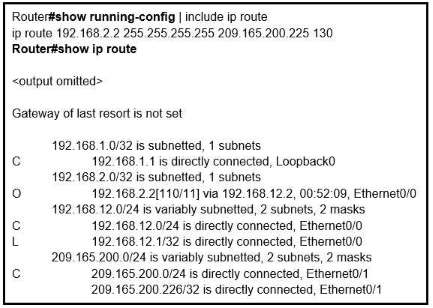 An engineer configures a static route on a router, but when the engineer checks the route to the destination, a different next hop is chosen. What is the reason for this?

The AD of static route is manually configured to 130 which is higher than the AD of OSPF router which is 110. 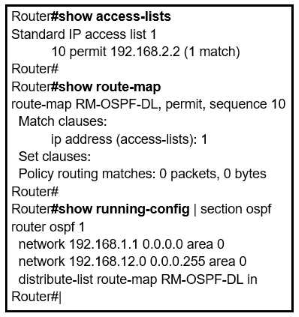 Drag and drop the OSPF adjacency states from the left onto the correct descriptions on the right.

(Reference: http://www.cisco.com/en/US/tech/tk365/technologies_tech_note09186a0080093f0e.sh tml)
https://www.cisco.com/c/en/us/support/docs/ip/open-shortest-path-first-ospf/13685-13.html
Down
This is the first OSPF neighbor state. It means that no information (hellos) has been received from this neighbor, but hello packets can still be sent to the neighbor in this state.
During the fully adjacent neighbor state, if a router doesn't receive hello packet from a neighbor within the Router Dead Interval time (RouterDeadInterval = 4*HelloInterval by default) or if the manually configured neighbor is being removed from the configuration, then the neighbor state changes from Full to Down.
Attempt
This state is only valid for manually configured neighbors in an NBMA environment. In Attempt state, the router sends unicast hello packets every poll interval to the neighbor, from which hellos have not been received within the dead interval.
Init
This state specifies that the router has received a hello packet from its neighbor, but the receiving router's ID was not included in the hello packet. When a router receives a hello packet from a neighbor, it should list the sender's router ID in its hello packet as an acknowledgment that it received a valid hello packet.
2-Way
This state designates that bi-directional communication has been established between two routers.
Bi-directional means that each router has seen the other's hello packet. This state is attained when the router receiving the hello packet sees its own Router ID within the received hello packet's neighbor field. At this state, a router decides whether to become adjacent with this neighbor. On broadcast media and non-broadcast multiaccess networks, a router becomes full only with the designated router (DR) and the backup designated router (BDR); it stays in the 2-way state with all other neighbors. On Point-to-point and Point-to-multipoint networks, a router becomes full with all connected routers.
At the end of this stage, the DR and BDR for broadcast and non-broadcast multiaccess networks are elected. For more information on the DR election process, refer to DR Election.
Note: Receiving a Database Descriptor (DBD) packet from a neighbor in the init state will also a cause a transition to 2-way state.
Exstart
Once the DR and BDR are elected, the actual process of exchanging link state information can start between the routers and their DR and BDR. (ie. Shared or NBMA networks).
In this state, the routers and their DR and BDR establish a master-slave relationship and choose the initial sequence number for adjacency formation. The router with the higher router ID becomes the master and starts the exchange, and as such, is the only router that can increment the sequence number. Note that one would logically conclude that the DR/BDR with the highest router ID will become the master during this process of master-slave relation. Remember that the DR/BDR election might be purely by virtue of a higher priority configured on the router instead of highest router ID.
Thus, it is possible that a DR plays the role of slave. And also note that master/slave election is on a per-neighbor basis.
Exchange
In the exchange state, OSPF routers exchange database descriptor (DBD) packets. Database descriptors contain link-state advertisement (LSA) headers only and describe the contents of the entire link-state database. Each DBD packet has a sequence number which can be incremented only by master which is explicitly acknowledged by slave. Routers also send link-state request packets and link-state update packets (which contain the entire LSA) in this state. The contents of the DBD received are compared to the information contained in the routers link-state database to check if new or more current link-state information is available with the neighbor.
Loading
In this state, the actual exchange of link state information occurs. Based on the information provided by the DBDs, routers send link-state request packets. The neighbor then provides the requested link-state information in link-state update packets. During the adjacency, if a router receives an outdated or missing LSA, it requests that LSA by sending a link-state request packet. All link-state update packets are acknowledged.
Full
In this state, routers are fully adjacent with each other. All the router and network LSAs are exchanged and the routers' databases are fully synchronized.
Full is the normal state for an OSPF router. If a router is stuck in another state, it is an indication that there are problems in forming adjacencies. The only exception to this is the 2-way state, which is normal in a broadcast network. Routers achieve the FULL state with their DR and BDR in NBMA/bro adcast media and FULL state with every neighbor in the remaining media such as point-to-point and point-to-multipoint.
Note: The DR and BDR that achieve FULL state with every router on the segment will display FULL/DROTHER when you enter the show ip ospf neighbor command on either a DR or BDR. This simply means that the neighbor is not a DR or BDR, but since the router on which the command was entered is either a DR or BDR, this shows the neighbor as FULL/DROTHER.
https://www.cisco.com/c/en/us/support/docs/ip/open-shortest-path-first-ospf/13685-13.html
Reference: http://www.cisco.com/en/US/tech/tk365/technologies_tech_note09186a0080093f0e.shtml)
https://www.cisco.com/c/en/us/support/docs/ip/open-shortest-path-first-ospf/13685-13.html 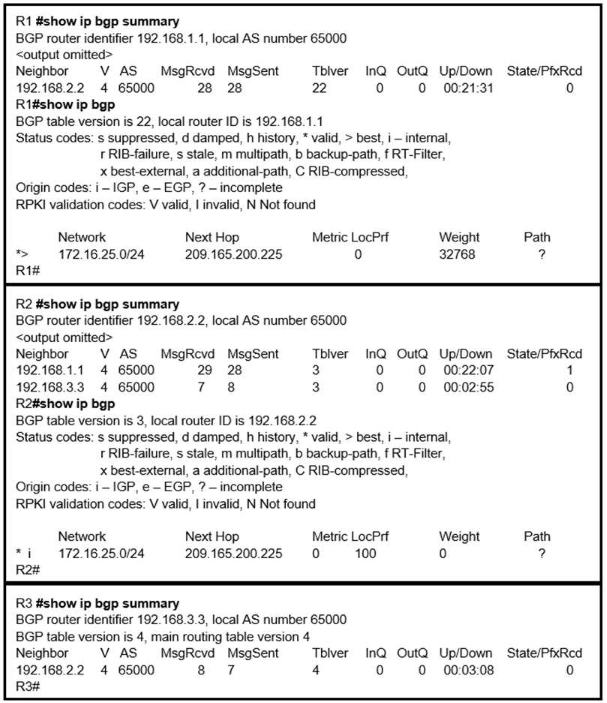 In which circumstance does the BGP neighbor remain in the idle condition?

Which attribute eliminates LFAs that belong to protected paths in situations where links in a network are connected through a common fiber?