After a redundant route processor failure occurs on a Layer 3 device, which mechanism allows for packets to be forwarded from a neighboring router based on the most recent tables?

What is the differences between TCAM and the MAC address table?

What is the function of a control-plane node in a Cisco SD-Access solution?

Refer to the exhibit. What is the result when a switch that is running PVST+ is added to this network? 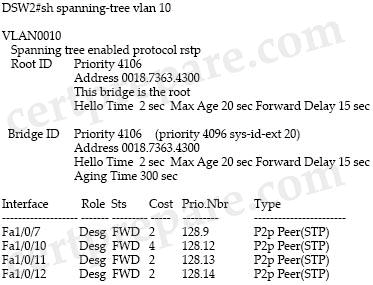 What is a characteristic of a next-generation firewall?

Which measure is used by an NTP server to indicate its closeness to the authoritative time source?

The stratum levels define the distance from the reference clock.
A reference clock is a stratum 0 device that is assumed to be accurate and has little or no delay associated with it.
Stratum 0 servers cannot be used on the network but they are directly connected to computers which then operate as stratum-1 servers.
A stratum 1 time server acts as a primary network time standard. 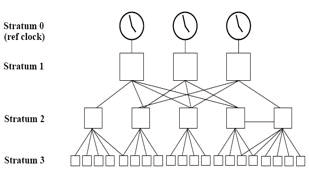 If you have Cisco SD-Access implemented and DNA Center becomes unreachable then the wired and wireless network will continue to forward packets as usual.
There will be no impact to network performance or behavior. Yes you will be able to SSH / telnet / console into switches and wireless network infrastructure as usual.
For the period DNA Center is unreachable, Assurance data will be lost,and you will not be able to make configuration changes to the Cisco SD-Access network.

Which two components are supported by LISP? (Choose two)

An Egress Tunnel Router (ETR) connects a site to the LISP-capable part of a core network (such as the Internet), publishes EID-to-RLOC mappings for the site, responds to Map-Request messages, and decapsulates and delivers LISP-encapsulated user data to end systems at the site.
A LISP proxy ETR (PETR) implements ETR functions on behalf of non-LISP sites. A PETR is typically used when a LISP site needs to send traffic to non-LISP sites but the LISP site is connected through a service provider that does not accept nonroutable EIDs as packet sources. PETRs act just like ETRs but for EIDs that send traffic to destinations at non-LISP sites.

Drag and drop the virtual component from the left onto their descriptions on the right.

The VMX file simply holds the virtual machine configuration.
VMDK (short for Virtual Machine Disk) is a file format that describes containers for virtual hard disk drives to be used in virtual machines like VMware Workstation or VirtualBox.
An OVA file is an Open Virtualization Appliance that contains a compressed, “installable” version of a virtual machine.
When you open an OVA file it extracts the VM and imports it into whatever virtualization software you have installed on your computer.